Bachelor Graduation Project for Utrecht School of the Arts

Bachelor graduate students in Interaction Design at Utrecht School of the Arts need to come up with a completely new product during their final months of the study trajectory. The students are challenged to find a niche in the market, a problem that needs solving. They are then asked to do research, go through various stages of the design process to eventually create a prototype that can demonstrate the functionality and interactions of the user with their product.

The end result of this project is a design for an iPhone/iPod application that I’ve called Challengers. Challengers is a product aimed at helping basketball players and their coaches. It helps the player become better at the game by providing them insight into their body movements, and play style. The application has many features and its content can be split into the following sections, the first one being exercises. In this part of the application the player can pick exercises to practice and having step by step tutorials guide them on how to perform these. The second section is workouts, here the player or coach can combine multiple exercises which allows players to do complete training routines. The third part is results and gives detailed overviews of all actions performed by the player, the player can see his ball handling ability, speed, impact on the feet, directions in which the body moves most frequent, jumping height and shot balance. And the last section is a well designed messaging system to share your results, exercises, workouts, location or normal text messages with others, so that you can challenge and invite others to play and become better with you.

“Create a product that helps basketball players improve by themselves, giving helpful insight into aspects that go unnoticed by coaches and players themselves while playing the game.”

The target audience for this project is mainly basketball players between the age of 14 and 40. They are the players that are consciously trying to improve on their basketball skills and be more aware of their playing style. Or are trying to recover from a injury or break from basketball and trying to get back into the sport.

Other stakeholders for this product are basketball trainers and basketball coaches.

When I set out to do research for this project, I did two forms of research. Interviews and quick prototype testing of the interfaces. I headed out to interview my target audience outdoors on public basketball courts and inside my own basketball club. My interest during the interviews was focussed on their current problems with basketball, and how they became better players themselves. A common problem was injury, almost all of them admitted to once having had an injury in their ankles, knees or lower back, due to the intense movements of the body during basketball.

The other side of my interview was focussed on how they became better players, how they practiced new techniques and what they found to be most difficult.

The answers that I got from this were pretty much all aligned in the same direction, players learned by playing against better players than themselves, who would give them advice during the friendly games. Being shown what they did wrong or someone correcting their stance that made them feel the difference and immediately showed them a better way of doing things was something that resulted in them being better. Other than that they said repetition and practice made them better, going to basketball practice with their team each week, or spending time on an outdoor court just practicing moves by themselves.

– The application interface needs to give clear comparisons between previous workouts of yourself & other players that are ranked better so you can learn from them.

– My product needs to encourage to perform repetitions and show growth in skill and technique.

– As last requirement, my product needs to show differences in basketball playstyle clearly and give clear instructions on how to do things right. 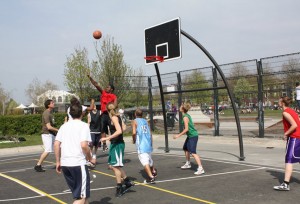 My design process started by taking a close look at the game and people’s playstyle, I had to figure out what aspects of the game needed to be addressed in my product. What parts of the game are important to make someone a better player? In what aspects do certain players excel over others and which of those can I address with an interactive product? It became clear quickly that a players footwork made most of the difference, their agility over others, the power with which they would jump off the ground, their weight distribution over both their feet creating for a better balance and quicker movements, it was what seperated the good from the great players. 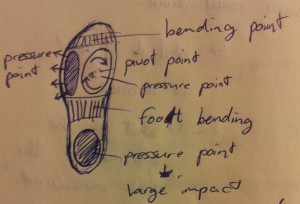 With this information, I started sketching and conceptualizing a product that would track these foot movements, note that this was back in the beginning of December 2011, before Nike+ Basketball was publicly announced. So in the first two weeks I came up with a concept that now would be almost identical to the Nike+ basketball concept. I started sketching a pair of basketball shoes and would fill it with different sensor technology. These sensors would track the rotation of the shoes and weight distribution by measuring the pressure in the soles. This information would then be sent to a mobile device through blue tooth connection, and it would be worn by being strapped to the arm. 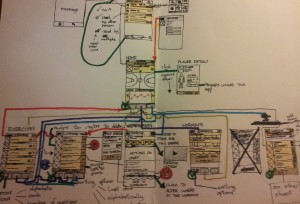 After Nike announced Nike+ Basketball, in February 2012 I figured that I needed to step up my own design game, and had to try and come up with an application that has features that they did not show in their presentations. Enjoying the relief that I no longer had to produce an expensive and complicated prototype of the sensor technology anymore. I could completely focus on my target audience and the interactions they would perform with my product. I decided that if I would create an application for basketball, I could not ignore the fact that the game is played with the hands, and therefor I needed a way to track arm movements to register dribbling and shot motions. This enabled me to explore new ideas, like creating basketball exercises and workouts as they would be done on the court and providing feedback on them. 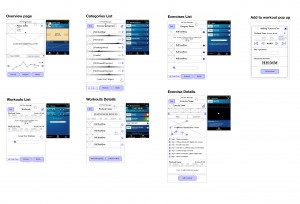 The project from there on continued into lots of conceptual thinking, sketching and restructuring of the application to create for an easy flow through the interfaces. Making all areas of the application easily accessible as the player would have to navigate through them during intense workouts. Doing research into when the player would need the actual display to show information during their game and whether they needed different forms of feedback in between.

I found it important that my application would barely have any implications on how people do their basketball workouts & exercises. The way the instructions would flow into action on the court would have to feel natural and should barely be noticed or be of hindrance to the player.

I’m still programming a functional prototype of this application, but on the right I preview some of the screen designs that are ready for the application. Read the descriptions of each image for a better understanding of the design choices behind them. 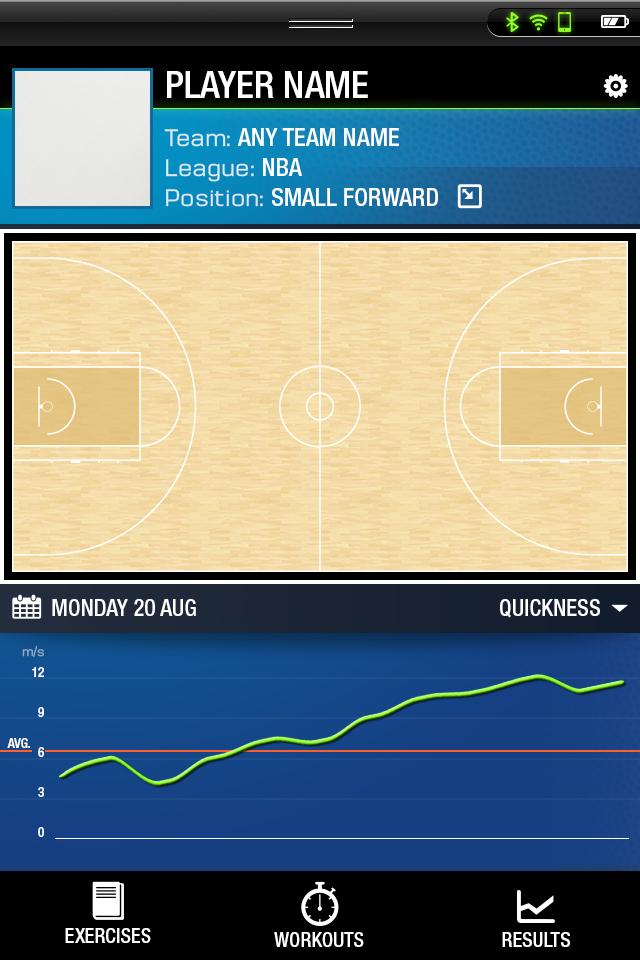 This is the main screen, after logging in and connecting/calibrating the shoes. It flips a map of a basketball court and displays data of where you’ve walked and performed actions. In the top right the icon takes you to your account settings. As for when you press the player avatar and description area it expands in further profile details. Underneath that you find the court view and a graph area that can display various data for all the dates you’ve exercised on. Both of these are dropdown menus. 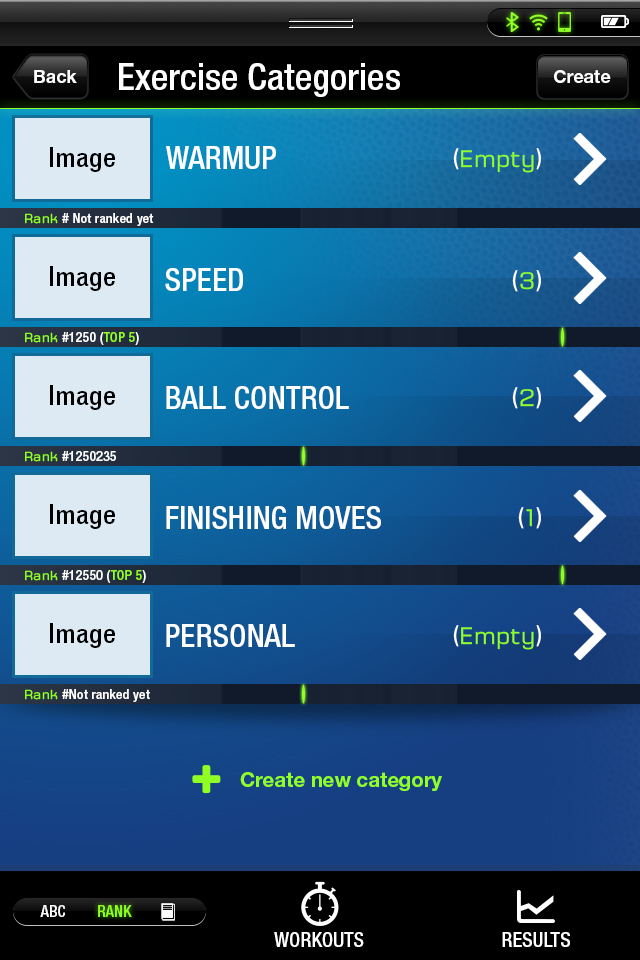 Exercises are divided in categories, and in each category players earn a ranking once they perform exercises out of that category. These categories can be sorted in various ways, alphabetically, by player ranking or by the number of exercises inside of them. 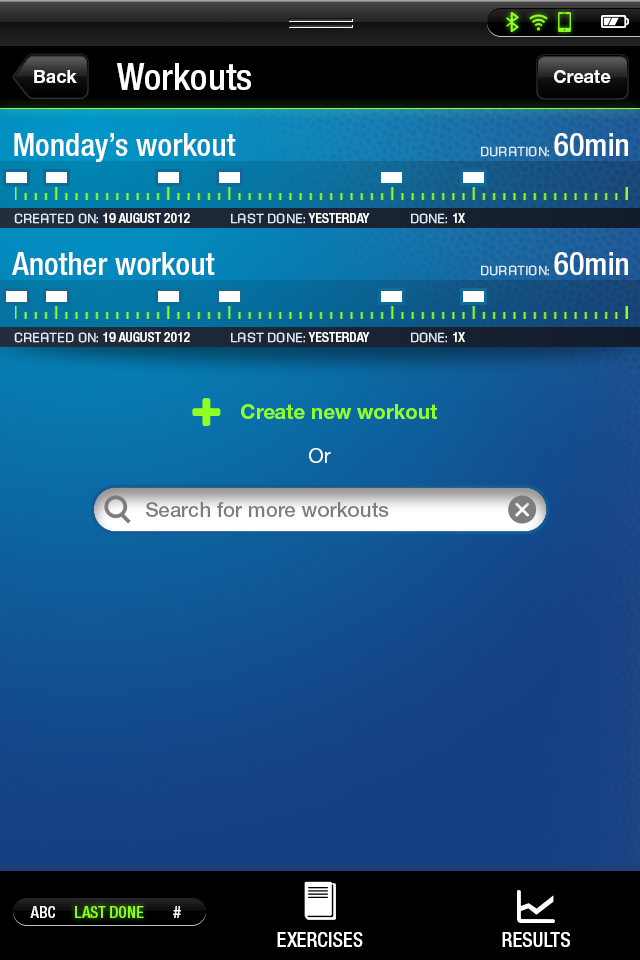 Workouts are displayed as timelines, and above the timelines are icons/images for the exercises taking place inside the workout. Players can search for other workouts created by different people (coaches/players) or create new ones easily themselves and start adding exercises. 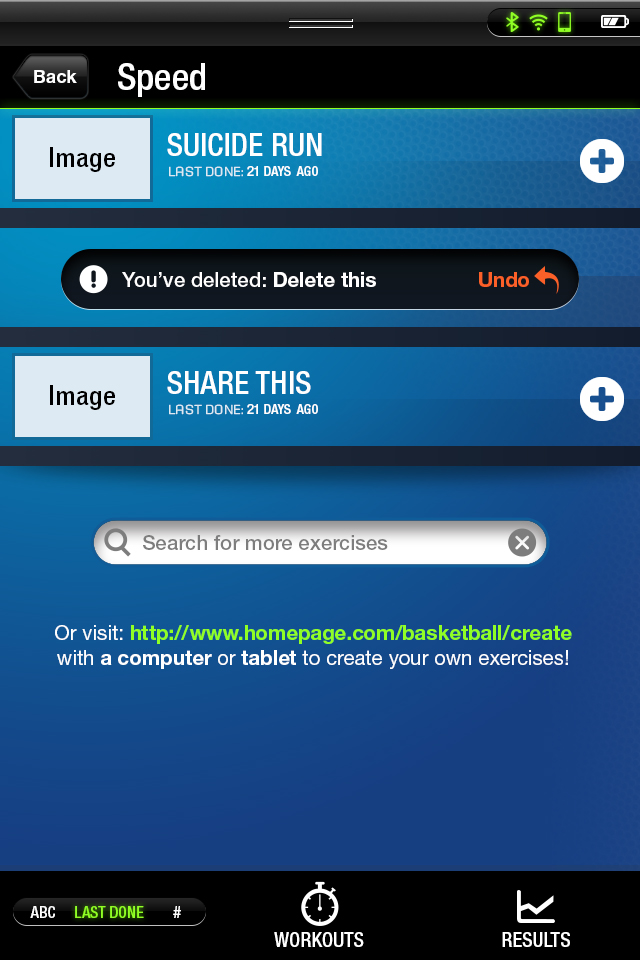 Just like many other apps swiping over list items to the right deletes them in my app design. 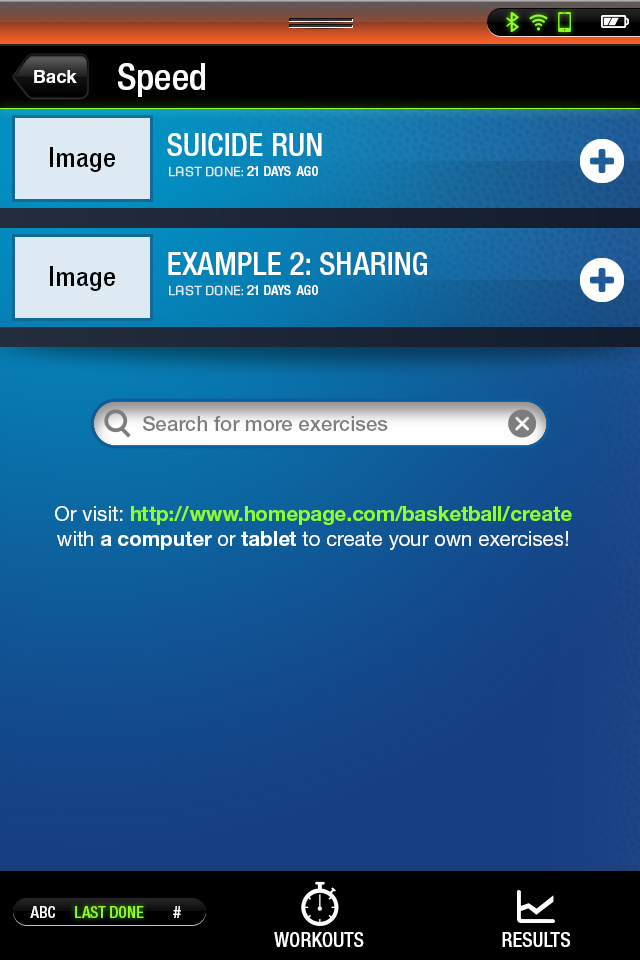 The app has a notification bar at the top of the screen that slowly flashes bright orange when new messages come in. The reason that this notification is so intrusive is because during play, people will wear this application on their arm, and it is easier to notice any new messages and an audio signal often remains unnoticed due to the noises of playing basketball itself. This messaging system allows for sharing workouts, exercises, geo-location, exercise results, text messaging or recorded videos to other players and social media. 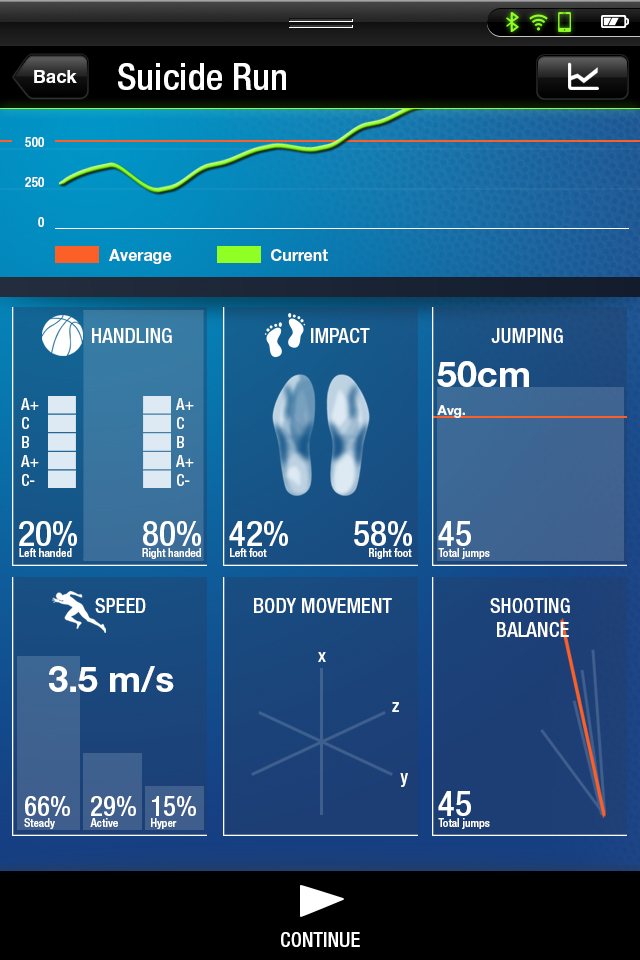 This is the results page, on the top you have the court view similar to the one of the main screen. But in this image you see the different data that is being collected by the app. The first is ball handling, it records which hand is being used the most during the exercise, and rates every separate repetition of the motion on how well it was performed based on an ideal motion. The next section is impact, and records where the feet are hitting the ground the most. This can be useful to people trying to become faster, or become more balanced in their motions. On the top right you have a graph displaying the jump height performed during the exercise and the orange line display the average jumping height you’ve performed in other exercises/workouts. Then there is different speeds. A XYZ-axis graph with dots based on the central point of mass of the body to show when the body shifts direction and changes its balance. And lastly shooting balance. The length of the lines shows how far the arm is being stretched for the shot, the angle of the line reflects the angle of the arm towards the floor. 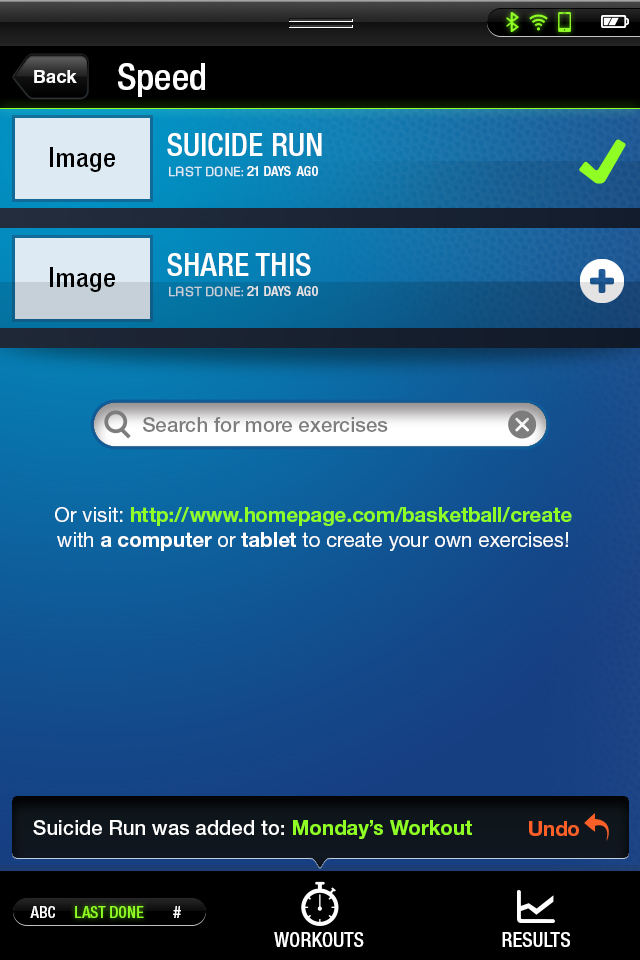 When adding an exercise to your workout, it allows you to undo the action in a small notification bar. 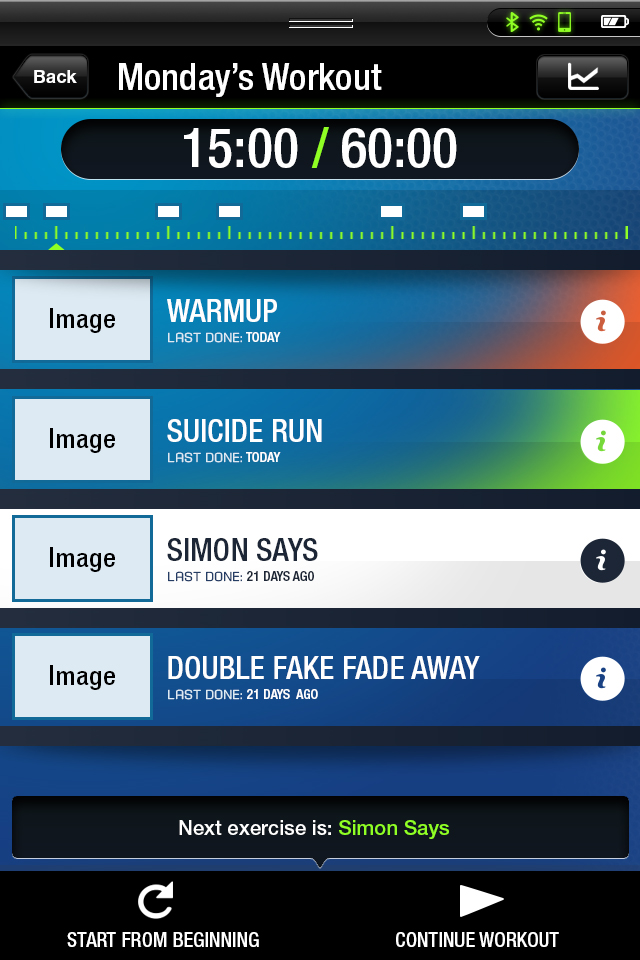 This is the detailed viewings of  a workout, it lists the exercises, those with a red glow were performed worse than previous attempts of the workout. The green glows are for the exercises performed better. The white bar displays the next exercise in the workout. By pressing the clock the player can type in a time of where to start in the workout. Or he can swipe through the timeline to select a starting point. At the bottom the workout can be started over or continued. 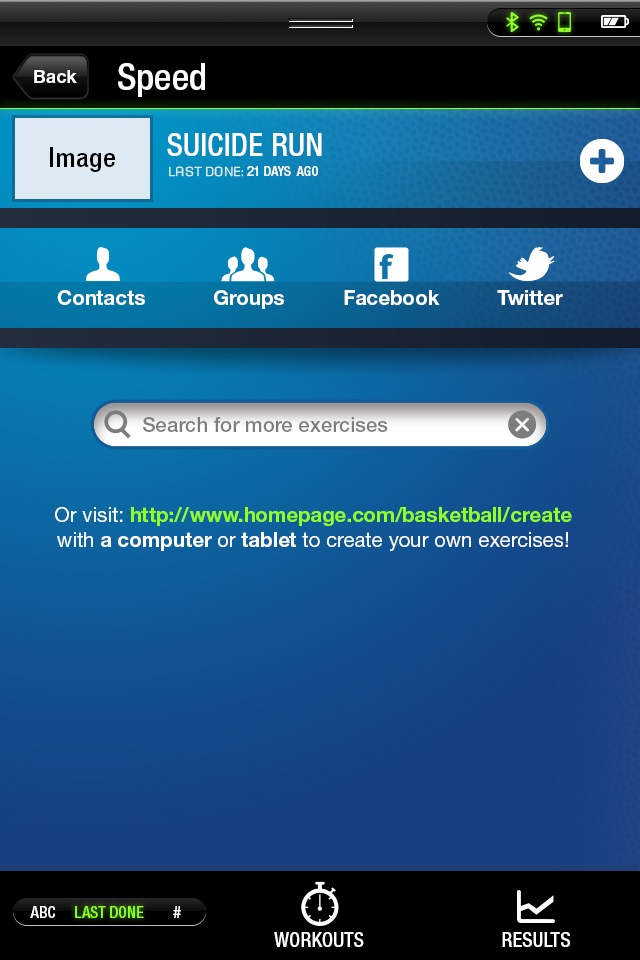 By swiping list items to the left it opens the options to share it with friends and contacts on various platforms and social media. 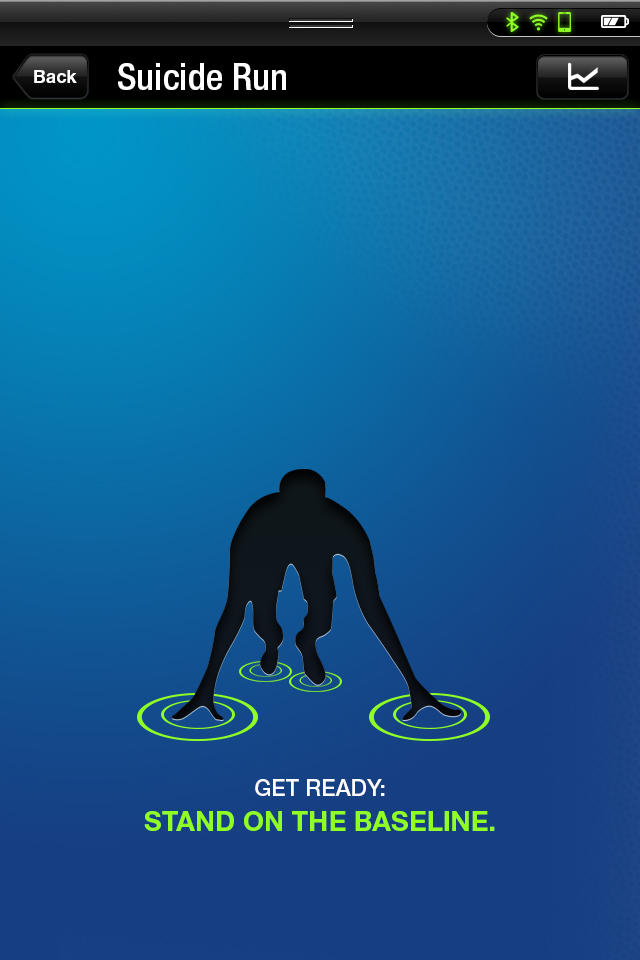 To perform exercises players get instructions, these instructions will start the exercise and will continue to give live feedback through audio signals and large graphics on the display throughout the exercise till it is finished.