DiGRA / Utrecht School of the Arts

Design a completely new format for the Digital Games Research Association global conference (2011) including a styled website, presentation formats, spaces, activities & a conference programming with interesting speakers. The conference would be hosted by DiGRA & the Utrecht School of the Arts together in The Netherlands. The end goal to bring game enthusiasts together, increase interest in the conference and encourage visitors to exchange their knowledge.

Hosted in September 2011 the Games Conference turned out to be a huge success and the deliverables by us to DiGRA consisted out of multiple documents. These documents presented various ideas for presentation styles, a full conference program with side activities, a visual style guide, a website which would be integrated with social media and all the events going on during the conference, a promotional video, and a concept pitch for FOVEA – An Interactive Floortile Display. All ideas presented were used as guidelines and inspiration for the DiGRA organization.

My personal contributions went into creating a one-page design document for the website which got used as a guideline for this conference, unfortunately it was stripped of a lot of its functionality probably due to budget and the fact that inclusion of social media was not as big as we had conceptualized.

This is the site they made out of it and you can read a bit more about the conference and its previous editions here: http://gamesconference.hku.nl

Other than that I played a huge part in the concept developed which was later named FOVEA by us and also created the visual style guide for the conference.

To get an impression of the actual conference that has taken place in 2011, check out some of the videos made by DiGRA!

Eric Zimmerman: In defence of beauty

“Design a new conference format for DiGRA that will set a new standard, starting a new life for the conference for many years to come.”

The members of DiGRA (Digital Games Research Association) this includes:

– Researchers (from all disciplines: humanities to computer science etc.)

– Students in all of the above

Research was something that was quite difficult to do for this project, as our client specifically requested that we should not get in touch with any of the members of DiGRA or mention this conference to anyone so we had to do our research through different channels.  We sent off two of our group members to attend another conference to start observing and questioning conference visitors there. Asking about their general conference experiences. Other than that we created a flash questionnaire application, which allowed for users to record their answers to questions through their webcam.  The combination of these two research methods allowed us Although no real design choices were just based on personas, thankfully we had access to the DiGRA boardmembers and almost had constant communication with Marinka Copier who was directing it all.

Other than the creation of the personas I spent at least two weeks into researching gamifaction. The term gamification is the integrating of game mechanics into your site, service community, content or campaign in order to drive participation of users. I started searching examples of good and bad gamification and tried to understand why they were considered good and bad. The science behind gamification is that digital interactions in games trigger the same neurological regions in the brain as the interactions would in real life.

People might forget what you tell them, but they won’t forget how you made them feel.

With my research results, we were able to start brainstorming and implementing gamification into every part of the conference, coming up with new lecture formats, collaboration games, and a networking room with a display as floor where the interactivity of the internet and its social media would be brought into physical space.

DiGRA really wanted to make the conference playful, engaging and educating. Something that eventually turned into the conference title: “Think, Design, Play”. This became the core of the entire conference, and we tried to wrap everything around this.

The product requirements were defined by the conference theme, “Think Design Play”, every concept we thought off  had to tick at least one of these boxes in order for it to fit in, creating for a nice balance in the conference. 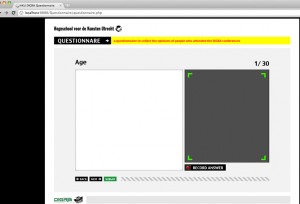 The kickoff for this project was pretty tough, we had 6 students all from different backgrounds and some got randomly assigned. After receiving the pitch of this project we knew that there was a lot of work to be done. Designing a complete conference is a lot of work!  We had to adjust parts of the project so that everyone would have something they could do. Nevertheless we created a set of good products, and it all started out with lots of brainstorming, research and communication with our client. We were allowed to use a digital questionnaire to gather data on our target audience all around the world. 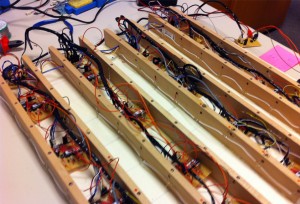 After a few weeks of brainstorming and pitching concepts to DiGRA we had a list of different things to deliver to DiGRA. I created the visual style & website while others in the group focused on creating a promotion movie, creating more ideas for the lectures and conference setting and a prototype of an interactive floor tile. As they were preparing the technology to work I continued conceptualizing the possibilities and integration of this interactive floor into the conference. And helped another student with brainstorming on the lecture formats and program. 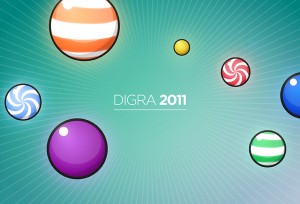 During this project I jumped in where I could assist, so I created different visual styles and pitched these to the client so they would have some choice. They liked a combination out of two of my suggested visual styles, and a third style which was that of Utrecht School of the Arts as they were being the host. With those guidelines I continued my works on these styles and integrated them into a final visual style.

The final products were a conference website design document. A promotional video which can be seen among the DiGRA videos above, a questionnaire tool which makes use of webcam recording plus questions making it possible for people to type their answer or tell it to us. An 80 page design document with over 40 presentations styles and activities including the games party that is to be seen in the videos all backed up with research into education & gamification, and different suggestions for the spaces of the conference. Many of these things got used for the conference. So I would like to end with two reviews of the DiGRA conference:

“I say seemingly because the great innovation for this years DiGRA was in conference design… or rather I now have a new appreciation that conference organization is a genuine and worthy design problem. Marinka Copier took her task in this sense very seriously. Acting as more than a meticulous host, Marinka and the organization team created unique sites of engagement for conference participants and our collective objects of study.”

“In short, I thought that the conference was excellent. I got plenty of good feedback about my work and I was able to socialise and liaise with many researchers from different fields. The conference itself was well organised, there were plenty of great speakers and plenty of activities. In one word, it was a proper fun conference. Kudos to the organisers. Guess what? I’m really looking forward to submit another work to DiGRA 2013.” 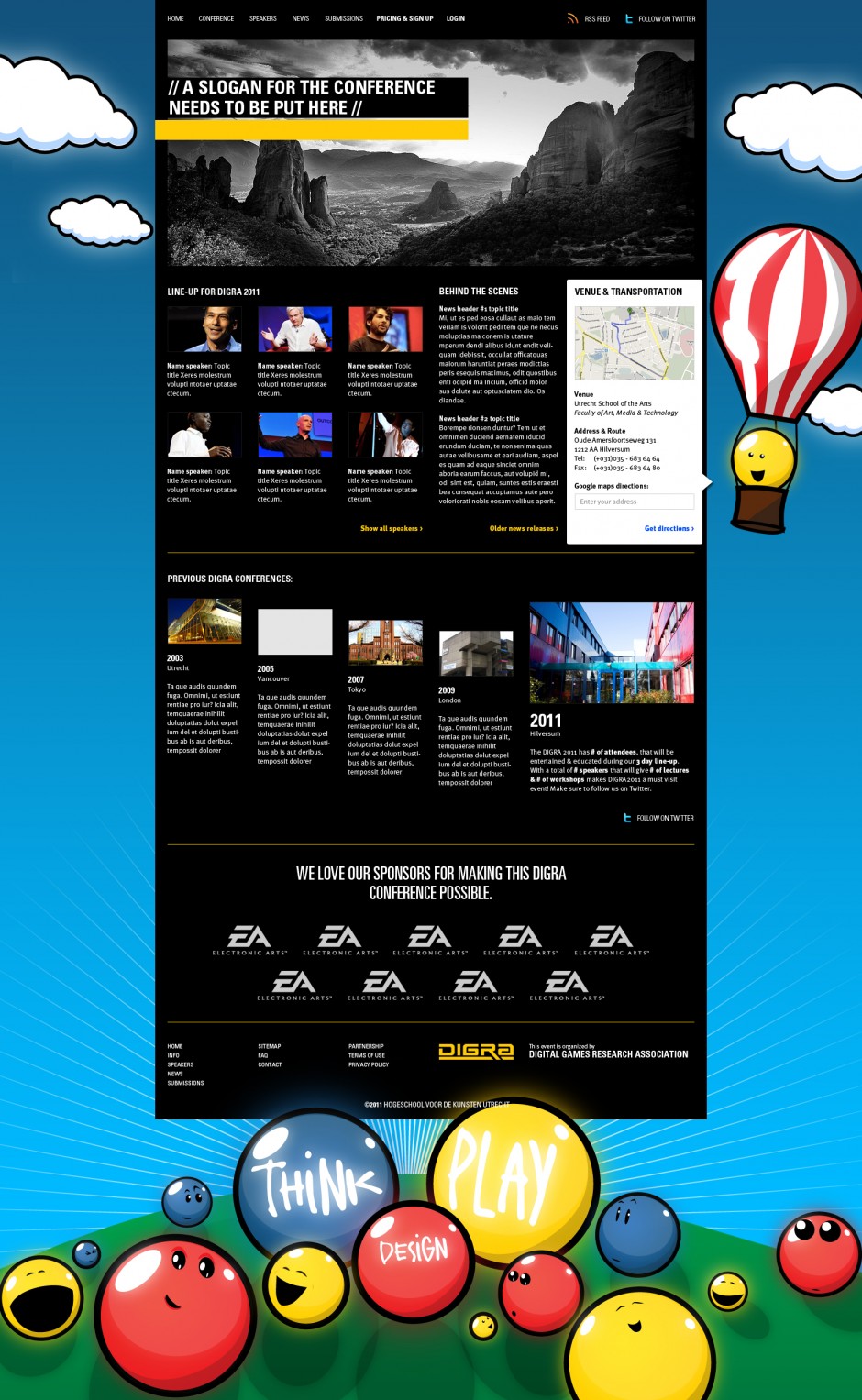 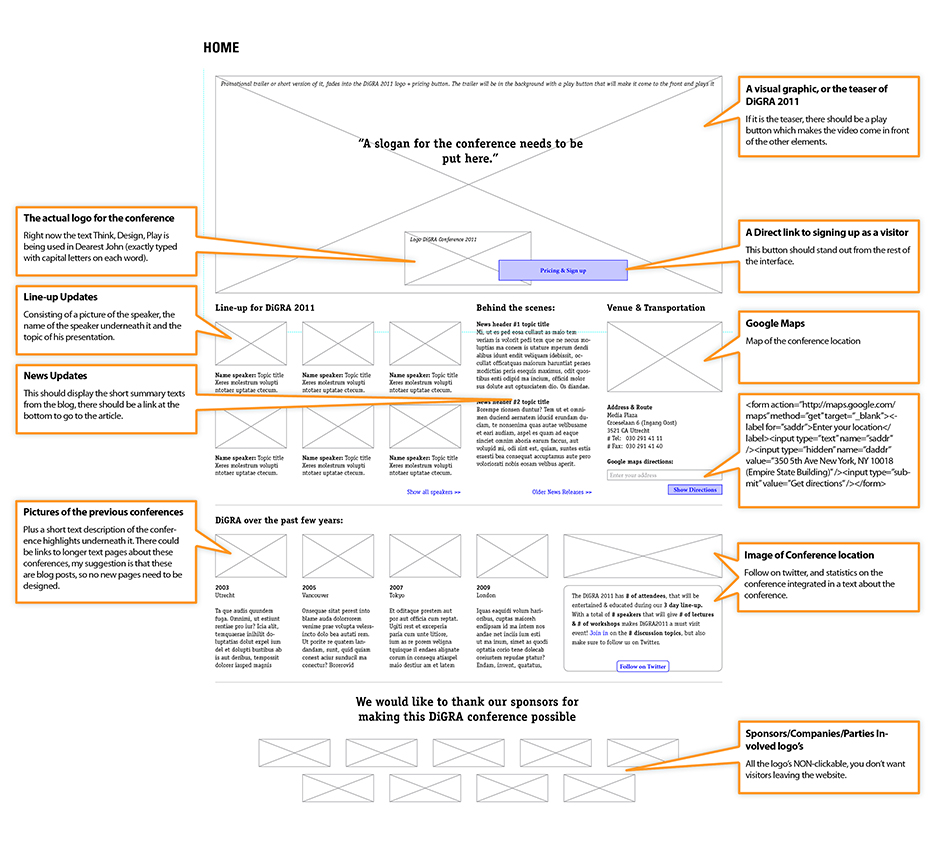