Utrecht School of the Arts is the only college in The Netherlands providing the possibility to acquire a master of arts degree. Through the long existence of the interaction design course, they have build a reputation across Europe, and in collaboration with the University of London they currently provide students the possibility of acquiring a master title “Design for Digital Cultures”. The bachelor & master course are very similar although the master trajectory is two months longer and requires the student to also deliver a research thesis relative to the work field, in combination with a prototype of a product just like the bachelors. The prototype developed should support the research thesis and it’s conclusions.

Unfortunately this master course is a “try once” opportunity, and I made a couple of mistakes that resulted in me not acquiring this degree but finishing with a Bachelor degree in Interaction Design instead. Nonetheless I learned a lot from the entire master experience and the two projects I worked on; FOVEA & the DiGRA games conference.

This project was a split result of three students individual work. Me and two other interaction designers from our previous project continued the development of an interactive floor display, which could be laid out as tiles and the concept was to create a 13 square ft. floor display. Each of the students in our group of three would have their own part in this project, and their own results, as it was meant to be an individual project. I never finished this project the way I had planned out to. Due to under financing as our sponsor couldn’t support us, the project had to be revised for all of us. The two other students who had set their interest in developing this working set of floor tiles to test on now had to revise to alternative methods which didn’t share the same accuracy, speed and detail as our initial concept. Joep & Samer eventually finished this project and their research by using a webcam from above to track a marker or person’s contour. But the project didn’t turn out the way we had hoped for any of us. The tracking methods Joep & Samer used didn’t allow for precise interactions with the interface. My research and goal for this project was to create an interactive interface for this floor display. Researching how such a large scale display would affect interactions and how it would change perception of interface elements for the user but also observers. And to prove this I needed to get measurable results where I could accurately measure the speed at which users would perform tasks or could identify shapes. The delay in our technology didn’t allow for me to do so, nor could I accurately track the interactions the user performed.

FOVEA is a concept that requires some context and explanation. This concept got conceived during the ideation process for the DiGRA conference, we wanted to bring networking features available on the internet to physical space without the usage of personal devices like tablets & mobile phones but just by being in the same space. FOVEA consists out of two parts, a floortile made of glass containing both LED’s turning it into a display and light sensors that recognize touch. As the shapes that touch on the glass surface block out the light, the light sensor technology can distinguish different shapes, the direction of them and track the movements. The second part of FOVEA is technology used for exact identification of people and objects. In our prototype we would use RFID tags embedded in the conference passes. With these two inputs we could start displaying detailed visual layers around these objects and people that we recognize as they are touching and interacting with FOVEA. It allows for showing information that would normally be invisible, things like people’s interests, why they are in that space, their name and profession, their latest works, etc. Through fun and surprising interactions with FOVEA we can break the ice and let people engage with others easier in social situations, and by linking it to popular social media and the internet any new connections and information gathered can be taken home quick and easy after the conference.

These videos display the end products of Samer & Joep, and give an idea of what they worked on.

“Answer: “What is the most suitable way of visually displaying personal interactive information layers on a floor?” and support the answer with a product and research thesis.

“Spaces like Schiphol Airport inspired me to do research into how 3D spaces influence the way we are able to perceive information.”

The target audience for this project are the visitors of conferences and other shared meeting spaces.

Like any project I believe that through research one can see whether there is a market or niche for the product you’re making. This research into my user group was already done during the DiGRA project, and we had their wishes and needs and pain points on paper. Conference visitors admitted to having trouble networking, spending precious time in getting to know people with little to no relation to what they were trying to accomplish or who could not help them in the future, an example would be someone looking for job opportunities talking to people who can’t employ anyone.

Generally they also felt lost about what was going on where during the conference. We wanted to create a platform that would allow for people to access information like they would on the internet. We wanted to put this information at the visitors feet, literally without forcing the visitor to take out their mobile devices or paper conference programs.

How I would display this information at the users feet was the research I was interested in doing, I absolutely loved this idea. I’ll try to explain why this topic was so fascinating to me! By displaying information at a ground level instead of on a display in our hands or closer to our eyes changes the way we perceive the information. This change is perception is really big, similiar to how watching a TV from the side can make reading subtitles impossible… but even more complicated, why? Because a TV is one flat surface which is positioned stationary in space, with the top of the TV facing the roof and the bottom facing the floor. Usually you can see what is displayed on it because you approach it from the right angle. But with a floor display things can be viewed from all directions, people can approach the displayed information from the opposite side which would be the equivelant of watching a TV display upside down. This causes for a real design challenge!

Trying to answer my main research question: “What is the most suitable way of visually displaying personal interactive information layers on a floor?” I spend my time in books looking for the things that would affect the way I would display  personalized interactive information layers to the user. Marking out the different segments of my research thesis that needed answering I came up with a list of questions and topics I wanted to write about and study through prototyping and tests:

– How does perspective influence the ability to read and recognize objects projected on a floor?
– How do strong do the following gestalt phenomena(similarity, continuation, closure, proximity, figure & ground) apply when seen on a floor? And how do they affect the interface?
– How can we use perceptual organization to make a better floor interface? Addressing the following principles: common region, common fate, connectedness, synchrony.
– What is the functionality of colour and contrast within an interface? And is this different for a floor interface?
– How do we create segmentation between the floor and displayed interface elements?
– How can we create feature awareness within a new form of GUI?
– How can we manipulate and control the users attention for interface elements?

The product that we created, had three requirements.

The product needs to be fun to watch, it needs esthetics that attracts people, make them talk about what interaction is taking place on top of it and trying it out themselves by moving on top of the floor surface and interacting with the interfaces and information displayed.

People need to remember our experience after they walk away from it, they need to be able to take the things they did on our interactive floor home. New connections made, things they have seen and done, everything needs to come together in one place. 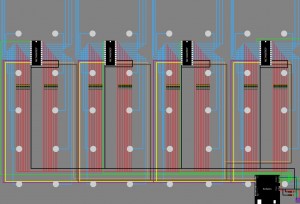 Continuing from our previous project, we had to deliver a proposal containing the technical specifications and pricing for our final prototype, and a working demo to prove that things would work. The original plan was to make a 52 square ft. floor so that it was applicable during the DiGRA conference and could play a core role in the setting of this conference. Joep & Samer spend a lot of time writing this technical proposal and constructing the demo and even started reaching out to companies that could help us mass produce these tiles, while I was further developing the concept for the software and how it would apply in a conference setting. 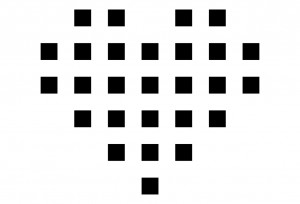 Meanwhile I started reading many books to learn more about human cognition and gestalt principles and data visualizations. I really wanted to support my designs from theory. I wanted to be able to explain all my choices. I wanted to be able to explain how the gestalt principles apply to interfaces in physical space. I also found it important that we could  support why we were trying to make networking features from the internet available to the physical world with our product. I was now trying to become a Master of Arts, and I would show them how mastery is accomplished! By practice and study, the study I was putting into these topics was all preparation for when Joep & Samer finished building the prototype on which I could also test my designs. 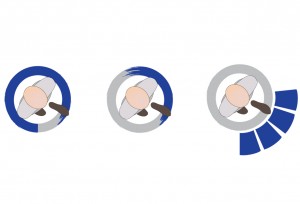 So how did I go about designing the interface? Designing a floor interface that was going to be controlled with feet gestures has certain constraints and limitations. The interface was going to consist of three different states, an active state where the user is interacting with the information displayed himself and an inactive state where that person is just engaged with his other surroundings. At this moment others should see information about this person. Once these two people are close to each other the third state gets enabled and both their personal interfaces should start to connect to one another and allow for different interactions. 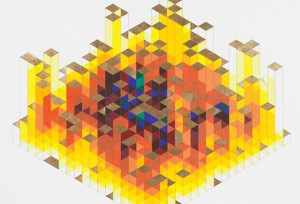 Lots of the visual design of this interface would come forth out of research, one of the main problems for this was to figure out how to deal with the fact that the displayed information could be approached from all angles. Where as a circle looks similar from different angles and is more appealing to approach than a square with 4 sides, the circle is less user friendly as displaying information like for example text in a curve makes it difficult to read. Out of testing triangles proved to be a good building stone, and I started collecting inspirational art built out of triangles and hexagons.