During the second year at the Utrecht School Of The Arts, me and one other interaction design student were paired for a project called Design for Space. The challenge was to find an inspiring public space of our own choice and design an interactive product specifically for this location. The product needed to have an added value for the location, adding onto the experience, services or products being offered at that location. Me and Joep, decided we wanted to design something for inside Museum Speelklok. With its huge collection of pianollas, barrel organs, music boxes, orchestrions and other instruments Museum Speelklok takes the position of world leader in automated music instruments, welcoming thousands of visitors each year through its doors.

We created a proof of concept and almost finished prototype for our final product, unfortunately due to circumstances the project was put to a hold before it was finished and later never got picked up again as the workspace we previously had was unavailable to us.

Our product would be a music table, the only thing that needed to be finished was the internal mechanic arm that carried the sensors underneath the plexiglass surface. Something that needed to be placed very precisely and required industrial quality cogs to give the precision in rotation speed we wanted. This way we could use the sensors to detect coloured blocks on top of the plexiglass surface and let kids and adults create music patterns which would be played as if it was a modern digital music sequencer.

“Encouraging collaboration between parent and child to let them experience the contrasts between classical and modern automated music in a stronger sense.”

We target our product mostly at parents with their children and children by themselves.

For this project we did surveys and interviews with visitors and the stakeholders at Museum Speelklok, trying to paint us a clear image of the type of visitor coming to the museum. The audience is very different, there is people that silently come to listen to just the music, but there is also people that sing and dance along with the music being played. About 20% of all visitors is tourists, another 20% is children between age 4 & 12 with their parents and the rest consists out of seniors and adult visitors and students. During our interviews with parents we discovered that most of them agreed that there needed to be more things for kids to do physically. Most of the collection is just open for viewing and is behind ropes and glass, they felt there was to few things kids could play with. 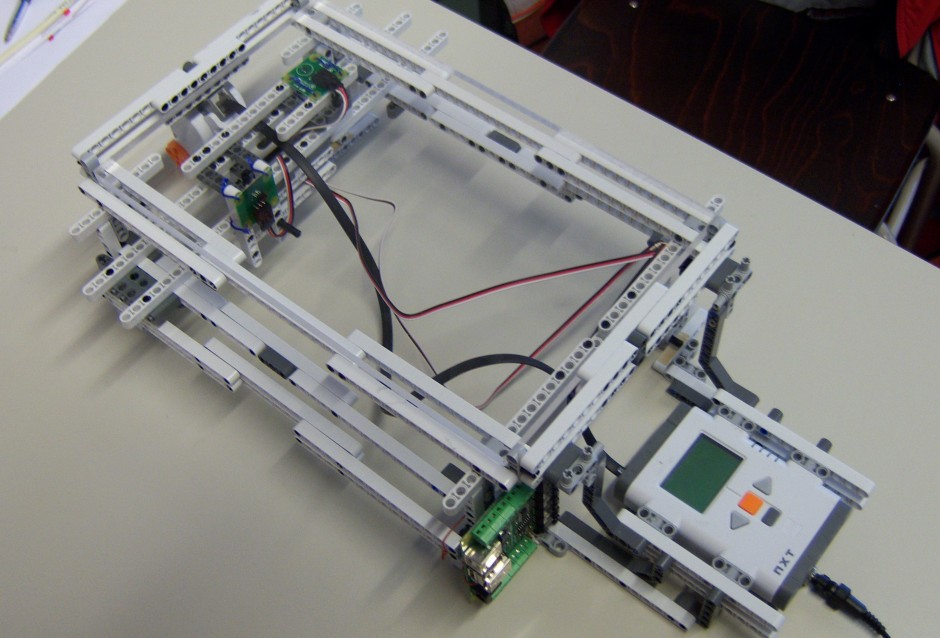 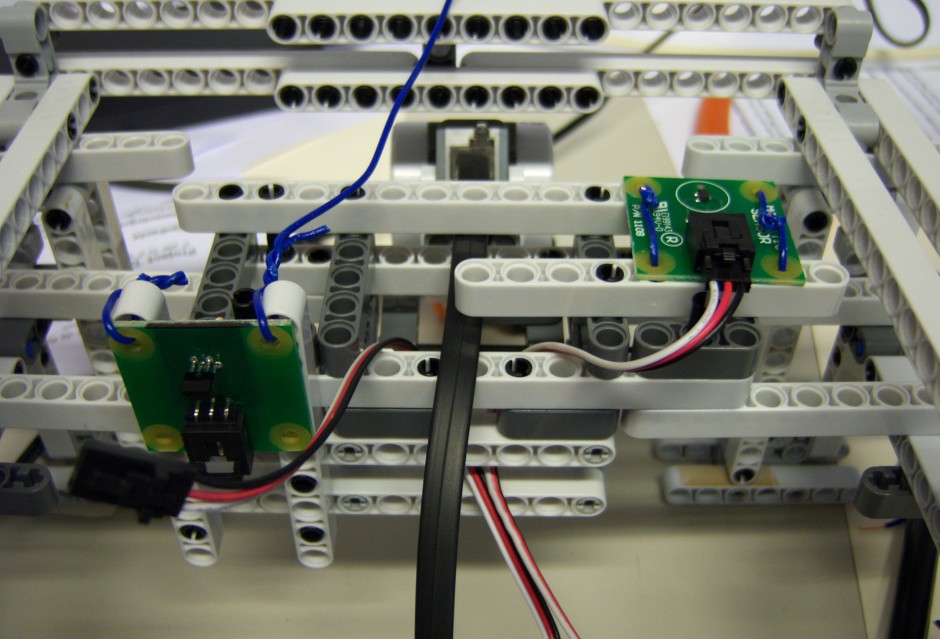 We had to create a testing environment for ourselves to start doing feasibility tests as to which sensors would work underneath plexiglass, and which wouldn’t. This way we could start creating the final code for these sensors so that our project would detect objects on our table surface. By building a quick setup out of lego we tested several sensors tied to a scanning bar that would move forward and back underneath a small sample piece of plexiglass.

Every item on display at Museum Speelklok, has three requirements to be accepted into its collection. These requirements are the following:

– A music program that allows for music to be played automatically.
– A music source that functions as input for the music that is being played.
– A sound source

Other than that there are other requirements for the product, it needs to be “monkey” proof and accessible for unsupervised kids. Besides that musea require the highest level of security and safety when it comes to things like fire hazard. 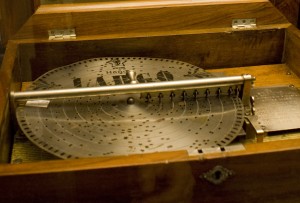 We started by visiting the museum multiple times, to learn about the environment we were designing for. We needed to know why the director called it the happiest museum in the Netherlands. Observing visitor behavior and our surroundings, listening to the music and noises in each space. We started photographing collection pieces to set out mood boards and other inspirational pieces that we could have with us while working at school. 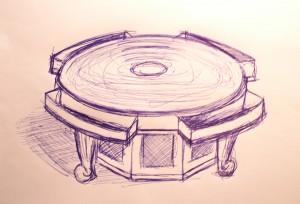 We started brainstorming on possible solutions, and we quickly stumbled upon the idea of a music table, and its functionality would be quite similar to a modern digital music sequencer where the musician drags around blocks representing different instruments and places them within a timeline creating for a music program. The idea was that by changing a disk in the middle the entire music style could be switched around from classical to dance or any other genre. Our music table would mechanically adjust the speed at which the sensors are moving underneath the plexiglass. Changing the beats per minute of the music for different music styles. 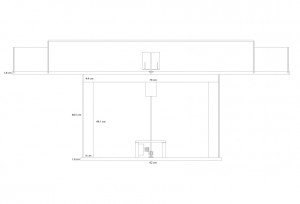 We created very precise blue prints for all parts of our music table, so that we could buy the wood required and get a plexiglass surface cut out for us. Also the mechanics inside of the table had to be steady in their speed and very adjustable. So we ordered industry quality cogs and other supplies including a special device that could slow the rotation of our mechanical arm with sensors more than 20 times, as any engine we could find had a to high rotation speed and once slowed down it would lose its torque. 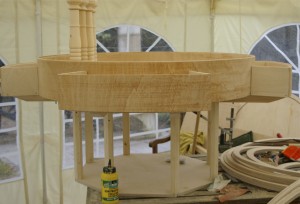 We finished building the entire table, doing all the wood work by our own hands, with a little help of Dido de Jong, a fellow interaction design student in possession of  a degree in furniture making. Unfortunately we were unable to finish the mechanics that were supposed to be inside the table otherwise our entire table would have been finished and ready for usage at any location.

The final product of this project was a nearly finished music table. By placing coloured blocks on its surface within 7 different groves users are able to program their own music. The middle disk could be changed to switch the complete music style. We created two different tracks with similar block setups to demonstrate this. The code for the detection of coloured blocks is finished and we have all the materials, we just haven’t found the time and location to finish this project completely. 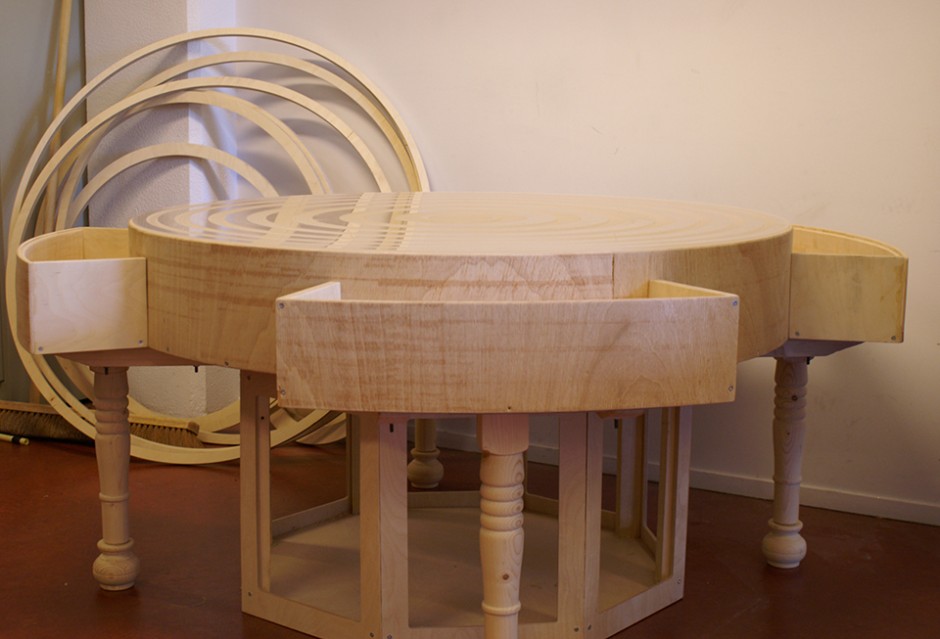 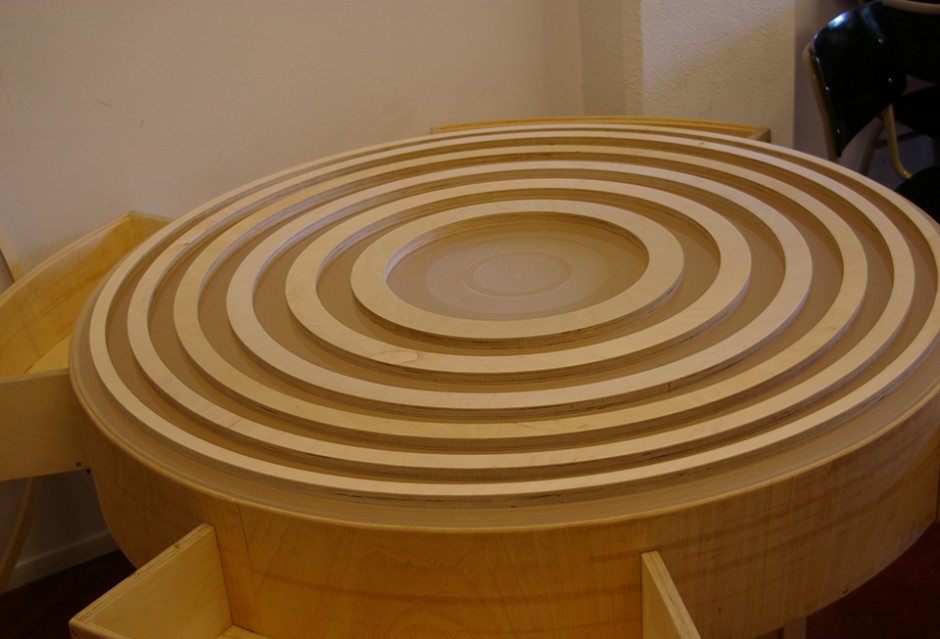