Steamtravels – The discovery of the Dutch Railway Museum

The result of our project was an applied game, which can be played here (unfortunately the game is only available in Dutch, if you’re English you can start by pressing the orange button, once into the intro you will be offered a choice between a green and yellow button, the green is for when you DID print a augmented reality tag and the orange button is for when you DIDN’T. From there on you will notice that everything pretty much goes by itself and explains itself by highlights or is quickly discovered by experimentation):

The game is an applied game that is aimed to be played by kids between 8 and 11, it takes them into the magical world of steam trains, and allows them to build their own steam train. At an unconscious level we get the player introduced to the different themes of the real museum and get them familiar to the different aspects of traveling by steam train.

“Create a surprising & innovative product that shows that the renewed Railway Museum is fun for the entire family.”

Our target audience was described by our client, they clearly gave us the instruction that we had to design something for complete families. They wanted to show that the Railway Museum and it’s contents is not just for the boys and men who love trains. We did research into this, and went outdoors and into the museum and surveyed a lot of people, splitting our research groups into three categories: kids, parents and extreme non users.

Due to the short duration of this project our research had to be done in a short period of time, our group of 9 split up into three seperate groups to do the research into our seperate target audience groups. Asking questions like:

“Who are the decision makers when going on a trip?”
“How do people orientate themselves for a day out?”
“Most visitors are re-visitors, why do they return?”

Out of our research, we developed fictional characters that represented our target audience (personas) trying to reflect their characteristics , their goals, what influences them and their pain points and frustrations. And converted all of these into requirements for our product. We also did several playtests in later stages, with the use of paper prototypes and computer calculations to simulate the game mechanics. And once the game was finished it was presented at the NLGD The Festival of Games, where we allowed festival visitors to test the game after it had been completed.

Our product requirements started to take shape after having spoken with our client and our target audience and also we started to brainstorm on our own requirements for the product. They left us with the following models that we used as checklists, each of our concepts needed to fulfill all these points in the end to be accepted as a viable solution.

Client Expectations:
Does it open up the museum?
Does it contain a positive surprise?
Is it a long lasting concept?

Product requirements:
Does it trigger new visitors?
Is the end product low maintenance?
Can we finish it in time?

User needs:
Is it accessible for all ages?
Is it playful?
Is it something that can be shared with the entire family?
Is it educational? 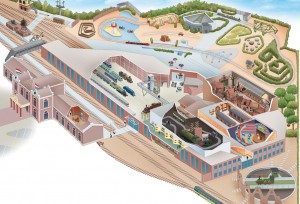 We started by going to the Railway Museum ourselves, we got a tour of all the museum content given by our client. We got a great impression of the museum, and it is totally different from any museum we had seen before, with an indoor roller-coaster,  a theatrical play, an elevator that takes you down to an old mining village, and long platforms with beautiful trains on each side and plenty of items to draw inspiration from! Generating ideas with a group of 9 was easy, but managing them all and being democratic about the design choices was a real challenge. That’s why we decided upon doing all the brainstorming in smaller groups of 3, that way making decisions was easier and faster. After brainstorm sessions which lasted 1 hour we would come together and pitch the ideas for the entire group. Other ways of controlling our project was by doing SCRUM meetings every morning, and having people assigned to be “conductor” of a certain part of the end product. They were the ones that would keep an overview of this part of the game and make sure that the end result would be good. 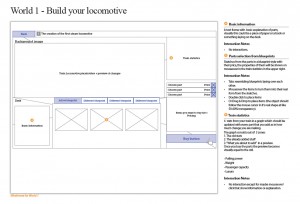 To score one needs a goal, when you have a big project like this it is difficult to get everyone working in the same direction. That’s why I’ve been specializing myself in documentation. During this project I took responsibility of creating various documents, like the personas and wireframes, but also a styleguide for each element within the game just to create a common ground among our fairly large team. Where I would try to describe each interaction and required element clearly so that in the end combining the products created by individual group members could be combined into a consistent and complete final product. 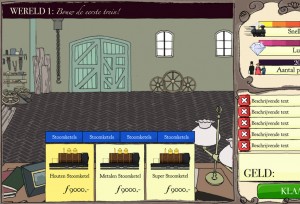 Going from wireframes, to the final artworks, to the actual working game was a huge process, we created an animation that would draw the player into the game and world of steam trains. Making use of augmented reality we try to create clever interactions to keep the player engaged and have something special to talk about with others. All this was done in an iterative process, where each step we would keep checking our concept against our set out models for the product. We conducted user tests with several kids through paper prototypes backed by simple computer calculations to confirm that our end game would work.

Please check the game out at:
http://www.spoorwegmuseum.nl/stoomreizen